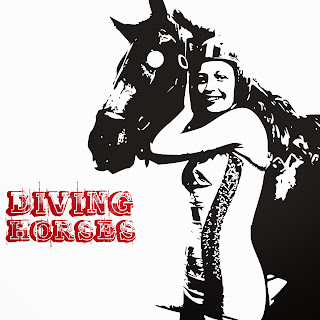 I met DJ Dan Mollen at an Annapolis, MD bar around three years ago. I don't actually recall how it all went down, but I can imagine a Pixies song was playing on the jukebox and a music conversation started that continues to this day. While we share a boatload of music in common, it's our differences that make an afternoon kicking back a couple brews that much more fun. Usually we'll start out talking about some hot new indie rock band and then without fail he'll mercilessly mock my love for pop, country or some "passe" 90s alt band that I happen to be seeing that week. As you'll read in my Totally Covered interview, DJ Dan has very strong opinions on what music should be and I respect that.

Totally Covered (TC): What was the impetus for this project?

DJ Dan: I’ve been a DJ for a long time but since the advent of the iPod, it’s a moniker that’s become increasingly troublesome to me. When I started playing music, I got hired for three things: I had a lot of records, I had taste in music that people seemed to respond to, and not unimportantly, I had equipment. Obviously now, every bartender in America has an iPod and while that’s not always a bad thing, a lot of the time it is. But rather than hearing a broader variety of music when we’re out at night, we’ve been subjected to either increasingly homogenous playlists or stuff that frankly, blows. That’s a long way of saying that I saw this project as a way of paying homage to the music that really formed my sensibilities and a lot of that is grounded in what I would call college radio or classic modern rock. Plus I’ve always been a sucker for a good cover.

TC: How did it all come about? Ideally (and realistically), what are you trying to accomplish with this recording?

DJ Dan: As with anything else, it started off as a way to make music with my friends and have fun. But more than that, there were several things that I hoped to get in front of a broader audience. One, is that we have an incredibly vibrant music scene in Annapolis and it’s my hope that as a community, we can work together to get each other’s music heard outside of our immediate area. Secondly, it struck a chord with me to involve genuine talents in genres like folk, blues, or country and employ their voices in a dancefloor context. It’s not unlike the Verve Remixed series in that regard. Lastly, I really wanted to shine a light on the talent of my fellow Diving Horse, Softeyes. More people should be aware of his evil genius.

TC: We have previously spoken about IDM vs. EDM. Can you explain this concept for our readers?

DJ Dan: Defining EDM is tough because it’s become a uniquely American catchall term for a sound that has certainly permutated but has really been around for a couple decades at this point. But my mind conjures up several things when I hear the term -- simplistic but catchy vocals, big bass, grating synths, and a touch of white noise played really loud for shirtless frat guys in clubs where I would never go. I find its popularity to be somewhat perplexing especially when I consider how bad most of it sucks. But I don’t think that’s unusual for any genre really -- what seems to appeal to the mainstream is bad music of every stripe. Bad rock, bad rap, bad country, you name it. On the other hand, I’m really intrigued by this whole concept of Intelligent Dance Music (IDM). In my mind, it’s far more song-based and far less formulaic. When I think of the kind of dance music that Diving Horses aspires to, it’s artists like LCD Soundsystem, Hot Chip, and others that do such a great job of marrying lyrics that actually say something with electronic music that can do anything from soothe to rock. I’m not trying to compare us to them, but that’s the model.

TC: Are there any plans or thoughts to doing a live performance (even just a one-off) with the singers involved?

DJ Dan: That’s a tricky wicket, my friend, for such a studio-based project, but we’re ironing out the details, and I can tell you a few things. We’re going to have a release party. It’s going to feature a wide array of talented people that appear on the record. And it’s going to be great. 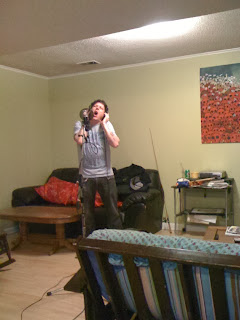 Jimi HaHa (Jimmie's Chicken Shack and The Jarflys) sings Evil Woman and I Wanna Be Adored on the Diving Horses record. I thought it'd be pretty cool to check in with him (via DJ Dan) to talk about the record, his music and our great city of Annapolis. I desperately wanted to print Jimi's unedited responses but DJ Dan put the kibosh on that saying Jimi's depraved answers would destroy too many lives. I kind of agreed with DJ Dan, but only because I really didn't feel like doing the "fact checking."

TC: Did you have a previous connection with the guys in Diving Horses? What made you want to work with them?

Jimi HaHa: I've known both Dan and Casey (Softeyes) for years. I met Dan because of his DJing. We have a lot of the same taste. Oh except he loves Dave Matthews (editors note: HA! Dan was expressing his love for all things DMB with me just last week). I met Casey when he was playing in a band and he eventually ended up playing guitar with Jimmie's Chicken Shack for five years. When they approached me about being involved in the project I just thought it was going to be so cool. I had to do it. I loved the songs they picked and knew they would make something we all would enjoy.

TC: How was recording for this project different than your previous experiences with Jimmie’s Chicken Shack and the Jarflys?

Jimi HaHa: It was much easier. Basically I went into their studio and sang the tunes and my work was done. Dan remembers that I was sick. I don't remember that, but I count on his memory more than my own.

TC: What’s next for you musically?

Jimi HaHa: I hope to get working on a solo acoustic record. Just one guitar track and one vocal track. Stripped down to the core.

TC: What does Annapolis music mean to you? Is there truly an Annapolis sound?

Jimi HaHa: It just means good music to me. I don't know if you could say there is an "Annapolis sound" other than it tends to be quality. I think there is a wide range of sounds that bands have come up with. They are usually very honest and original.

Give Diving Horses a like on Facebook and then check out the first single Evil Woman feat. Jimi HaHa at Soundcloud. If you like what you hear, you can then buy Evil Woman at either Amazon or iTunes.