So, last Friday I rendered myself speechless when I posted a video of GWAR playing Carry on Wayward Son. It got me thinking (never a good idea) about other odd covers out there. I think I found a few good ones. You've been warned.

In the summer of 1996 I was fresh-faced and out of college. I was working as an editor/reporter for my hometown's weekly newspaper. The office was a quick skateboard ride away from my mom's house (yup, I was living rent-free at my mom's house). Two weeks into the job a used record store opened up next to my office. Needless to say I was in heaven. I spent more time there than I did in my own office (which probably explains why I only lasted a year...I was going to quit anyway to move to DC). The record store owner was a former banker who said "screw it, I'm opening up a record store" (my kind of guy). We became fast friends. He gave me first dibs on any "new" used stock he received. Things were good. 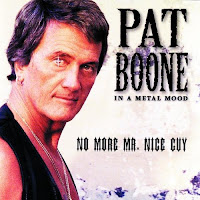 One day I was sitting in my office when the phone rang. "Scott, you gotta get over here," my record store owner friend said. He rarely called my office so I knew it had to be good. I rushed over. When I barreled through the door he thrust this gem into my hands. Yes, the squeaky clean Pat Boone had just released a metal cover album. "DUUUUDE, you have put it on," I plead. He reluctantly put it on (somehow he knew the disaster that he was unleashing unto our ears). For the next 40 or so minutes we ran the gamut of emotions (mostly us laughing uncontrollably until we started crying).

I never did buy No More Mr. Nice Guy. Shame really, as it's being sold on Amazon for over $50. Who would have thunk it?

OK, this one isn't a video per se, but you have to give up to Mr. Boone for tackling a little Guns 'N' Roses.